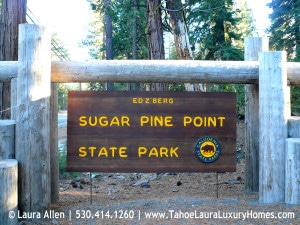 If you haven’t been to the Sugar Pine Point State Park in a while, this Sunday, June 8, 2014 is your day to visit the park for FREE!  In appreciate of the long-standing local support for this beautiful California State Park, the Sierra State Parks Foundation is offering a “Free Locals Day”!

The Foundation will pick up the $10/parking fee, along with the $10 per person admission fee to tour the Hellman-Ehrman Mansion.  The park is open from 10 a.m. to 4 p.m., so you have all day to enjoy one of the big attractions that brings visitors onto the West Shore of Lake Tahoe and into the Tahoma area for Free this Sunday, June 8, 2014.

The Park is located on both sides of Highway 89 South and is just south of downtown Tahoma, California in El Dorado County on the West Shore of Lake Tahoe.

On the lake side of the highway you’ll find over 2 miles of pristine Lake Tahoe shoreline and the Hellman-Ehrman Mansion, along with picnic tables, and natural grounds.  The Sugar Pine Point State Park covers about 1,000 hectares, which converts to almost 2,500 acres, and yes, you’ll see Sugar Pine trees in the area and their impressive pine cones that are typically more than a foot long!

On the non-lake side of the Park, you’ll find the markers from the 1960 Winter Olympics, as the Park was the site for the Olympics Nordic Ski events.  In the winter season, the Park is open with over 20 kilometers of marked cross country ski trails.    Want to feel like an Olympian?  Then get your cross country skis out and spend the day at the Sugar Pine Point State Park on their trails!

The Park is a great place for year-around activities of hiking, biking, cross country skiing, snow shoeing, and for just taking a break and sitting down on the shores of Lake Tahoe.   The Park also has seasonal camping sites, and you can learn more about staying there at the California State Parks website.

The Sugar Pine Point (California) State Park was originally the summer home for the Washoe Indians who use to come to the shores of Lake Tahoe to hunt and fish.  In 1860 a small cabin was built on this site for “General” Phipps, who was a trapper and fisherman.  His original cabin is still standing in the park and you can see it on the tour.

In 1884 a resort called Bellevue Hotel was built, just North of what is now called the South Boathouse, and was a popular place to summer here in Lake Tahoe, but was short-lived and lasted less than 10 years.

When the mansion was built the home was originally called the “Pine Lodge” and was designed by Walter Danforth Bliss, which featured electrical lighting, and indoor plumbing.  The estate included a tennis court, two boathouses, and cabins for the extensive staff.  The Hellman family spent their summers up here until the property was sold to the State of California in 1965 and the Sugar Pine Point Park was established.

The mansion is available for touring at the Sugar Pine Point State Park and will give you a glimpse into how the wealthy lived life back in the early 1900’s.

The Lake Tahoe area is rich in history and the Sugar Pine Point Park is an area that can take you back in time, and give you a feel for what it was like to be here over 100 years ago.

Ready to make Tahoma your second home?  Check out what is for sale here: