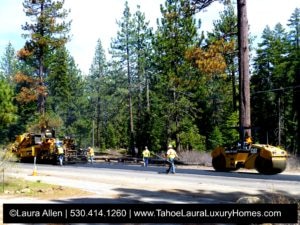 Tired of the large pot holes on the West Shore of Lake Tahoe, especially the super grande sized ones just outside of Tahoe City?

Next week they will do a similar repair on the South-bound lane of Highway 89 South, which means it the beginning of road construction on the West Shore of Tahoe City and you can expect Traffic Delays in 2016!

Normally I’d be complaining about the traffic delays, and how long those delays have been – up to 20 minutes at each stop, but today I’m singing the “Hooray, Hooray Road Construction is Under Way” tune!

Who knew I’d be so excited about getting road construction, but the West Shore was loaded with pot holes, and they just kept getting bigger – wider and deeper, and every time I went into Tahoe City, there would be more of them.

It was so bad drivers were weaving in and out around them.  Is that an impaired driver in front of you? No, it’s just someone trying to not destroy their car by swerving around the holes in the road!

I am not exaggerating, it’s true, there were a couple of times I was sure I’d lost an axle, or wheel.  Forget the wheel alignment I just had last summer, that was long gone with the first pot hole I hit last winter!

Some of our pot holes became so large that Cal Trans was seen spot filling the holes between snow storms several times over the past few month just to prevent accidents.  It was a tell-tale sign of just how bad our pot hole problem had become. 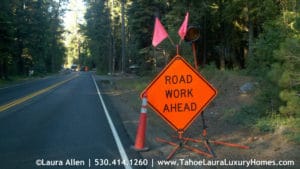 While I am cheering for these critical repairs, everyone needs to know this is just the beginning of a very long road construction season.

This year Cal Trans will be working close to the Tahoe City downtown area as they finish their work on the West Shore of Lake Tahoe with their water drainage project – curbs, gutters, and rock-work, which will cause significant travel delays as everyone will be slowed down as we work around the construction work.

In addition to the completion of this multi-year project that began back in 2012 that included Southwest Gas and their new natural gas pipe line, along with the California Department of Transportation (Cal Trans) installing a new storm water system along Highway 89 South.

You’ll find Cal Trans doing work around Fanny Bridge and just before you enter Tahoe City on Hwy 89 as they prepare for the new Fanny Bridge Revitalization Project, which will create three (3) new round-abouts, a West Shore pass that will go in and through the 64 acre area project, along with a new Fanny Bridge over the Truckee River – a multi-year project that begins this year.

In the Tahoma area they are working to find a solution to the road surface repair work they did last year that was not successful, so expect work down in that community later this summer once they come up with a solution to their surface road problem.

Road construction work is running Monday – Friday, and they will come up with schedule designed to minimize the traffic delays in the area downtown Tahoe City area during peak times and on weekends.  This year’s work will begin April 1, and will ends Nov 1, 2016.

Be smart and add extra travel time (30+ minutes) to get to your Lake Tahoe destinations.  You’ll save yourself a lot of frustration and reduce the stress of the delays if you leave early and plan for delays.  Be safe everyone!

Plan for Traffic Delays and Road Construction on from the “Y” at Tahoe City all the way down on the West Shore of Lake Tahoe this summer.

Thinking about making the the West Shore of Lake Tahoe your second home?