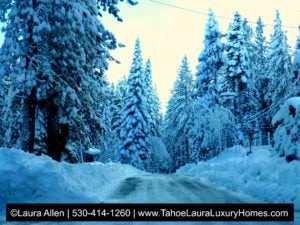 We had snow for the holidays and for those that made their holiday plans to be here in the North Lake Tahoe and Truckee area were rewarded with snow on the ground, skiing, skating, and so much more!

On January 1, 2017 it started to snow.  Fast forward five days later, and I’m still digging out!  To say this was a huge winter snow storm in North Lake Tahoe today, January 5, 2017 is an understatement.

North Lake Tahoe received over 7 feet of new snow over the past 5 days!  It’s been a long time since we’ve had such big back-to-back daily snow storms that just kept dumping more, and more, snow in the greater Tahoe City, Squaw Valley, Tahoe Donner, and Northstar areas, but that is exactly what has happened over the past five days.

Each day I’ve have been greeted with 6”, 8”, or, 1-2 feet of new snow.  Beautiful, cold, and a lot of work to shovel snow the walk-ways, stairs, and thank goodness for our professional snow removal service for the parking areas!

To give you an idea of just how much snow we’ve received here in greater Tahoe City – Truckee, North Lake Tahoe area, here are snow totals from some of our popular ski resorts:

Homewood Ski Resort – Homewood, CA – over 7 feet (84 inches)of new snow over that past 5 days! This morning they reported over 10” at the base (I live about 4 miles from the base of the ski resort on the West Shore of Lake Tahoe in Tahoe City, so I know this is true!) and 18” of new snow at the top.

The winter snow storm yesterday was so bad that late in the afternoon I-80 between Reno and Auburn was shut down.  No traffic!

That’s a big deal to stop all traffic going in both directions.  It was a smart move by both CalTrans and NVRoads, both government agencies that maintain and over-see road travel between the two states on this major Interstate 80, called it a no travel zone.  It was icy, snowy, and just plain unsafe to be out there on the roads yesterday evening and night.

Today we finally saw the blue sky, and it was truly a beautiful sight to see the trees, homes, and area covered in deep snow.

Driving down the plowed road today was unreal knowing that less than a week ago this was just a few inches.  It’s a narrow snow corridor with the deep snow piles on both sides of the road.  Take a look just how beautiful the West Shore of Tahoe City is after a mega snow storm! 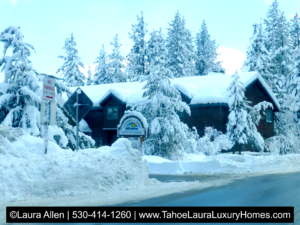 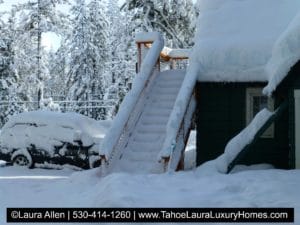 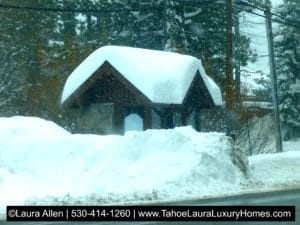 As I look at the weather forecast it looks like we’re going to have more winter storms for the new two weeks, snow, snow and more snow on the way!

If you love to ski, cross-country ski, snowboard, snowshoe, snowmobile, ice skate, or just love to play in the snow, now is the time to plan your winter trip to greater Truckee, Tahoe City, and North Lake Tahoe area!

It’s a new year – 2017!  Come up and take advantage of 7 feet of new snow that the North Lake Tahoe received over the past few days!

Thinking about making Lake Tahoe, California your second home? Check out the homes that are for sale here:

Want to see what condos are for sale in Lake Tahoe? Here are the current listings: