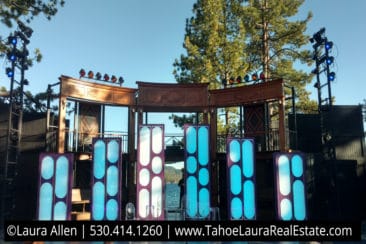 Summer in Lake Tahoe is a very special time of the year and one of the events we have enjoyed over the past few years has been the outdoor Lake Tahoe Shakespeare Festival in Sand Harbor (beaches of Lake Tahoe), Incline Village, Nevada.

The experience of watching and outdoor production at the Lake Tahoe Shakespeare Festival is one of those events that should be on everyone’s summer to-do list!

We’ve had the opportunity to see several of the Lake Tahoe Shakespeare Festival plays over the past few years and each one has been very well done.

Each season they have two main productions.  One is a play and performance written by William Shakespeare.  This year the production is Macbeth.

The second production has been either a musicals, comedy play, or a combination of a musical and play.  This year it is a musical titled Beehive, The 60’s Musical.

If you aren’t familiar with Lake Tahoe Shakespeare Festival, this is the 46th Anniversary of outdoor Shakespeare plays in the greater Lake Tahoe area and this years’ season opened on July 6, 2018.

You may not know that the Lake Tahoe Shakespeare Festival originally started in 1973 at the Ehrman Mansion in the Sugar Pine Point State Park, Tahoma, CA on the West Shore of Lake Tahoe.

In 1976 the Festival moved to Sand Harbor (part of the Nevada State Parks) just south of Incline Village, NV, which is where you’ll see today’s performances. 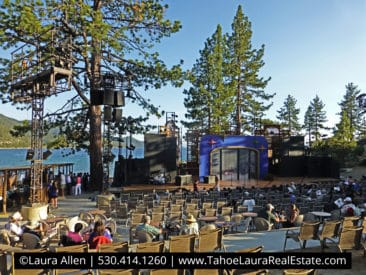 Last year I waited to share our experience after we had seen both of the main productions.

This year, I am not waiting until we have gone to both, I’m jumping right in and sharing our thoughts on the production we saw last night (Sunday, July 8, 2018).

We saw Beehive by Larry Gallagher an Off Broad Groovy Retro-Hit Revue and it was fantastic fun!

We were excited to see this performance so early in the season.  We arrived with about 45 minutes before the production started.  We did allow extra time for road construction, which is going on between Incline Village and Sand Harbor and to find a parking space.

We (Craig, my better half in life) were patient as we circled looking for a parking space to open-up.  After 5 p.m. parking is free, but finding a space can be a challenge in July as the beach is a very popular place to spend the day, so giving yourself a little extra time to park is a smart thing to do for this event.

Once inside we sipped on some wine, nibbled on cheese and veggies and waited for the show to begin.

It was a warm summer evening, and before the performance began, we could hear the waves of Lake Tahoe hitting the beach.

Craig and I felt very fortunate to be in Lake Tahoe on such a wonderful night to be outside.

The singing, the familiar songs, the dresses, not to mention the hairdos were terrific!

This musical is non-stop smiles as it will take you back in time when you first heard those popular songs.

For some in the audience they were teenagers during the 60’s, for others we know these songs from the radio, or movies that have made some of these songs well-known to all ages.

Beehive was a collection of songs from 1960 – 1969.  As they move through the decade not only do the dress styles change (from dresses with petticoats under them to mini skirts with white go-go boots), but so do their hairdos. It was energetic, and fun.

This musical has an extremely talented and large cast with six female performers and they sang and danced to over thirty songs!

The singers took us through time, and shared a perspective as to why some songs had a personal meaning and why the music was so powerful to them.

Their perspective came from the view point of young women growing up in the 60’s and it reflected a time of change.

Craig and I knew most of the songs, and we really did enjoy the performance.  The singers and their interaction with the audience from the beginning to the end was outstanding.

The singers, musicians (a live band was hidden behind the light boxes on the stage), director and production staff really knew what they were doing, and they put on a terrific show.

If you think that the Lake Tahoe Shakespeare Festival productions are stuffy, dry, too intellectual or are all about “where art thou” phrases with no laughter, and nothing but serious faces, think again.

This is the perfect choice for those that have never seen a Lake Tahoe Shakespeare Festival play, or production, and you should get your tickets now for an upcoming performance!

In addition to the two main productions, the Festival is also offering special one-time showcase events including dance, music, performances, along with a young Shakespeare program.

They do allow you to bring in your own picnic dinner and beverages. The only caveat is and this is an important one, your picnic supplies must be able to fit underneath your seat, so forget dragging in a large hard-sided cooler, or dinner for 12!

We had wonderful seats, and our excellent summer weather was perfect for being outside in the evening.  It was just right, however, I do recommend bringing a jacket, or light throw blanket just in case it becomes too cool, or windy.

At intermission we let our diets go and splurged on the individual cheesecakes they offer on their food menu.

I had the espresso chocolate cheesecake, and Craig had the lemon version.  We can both highly recommend these intermission treats!

Once the performance was over we gathered our things and headed out to the parking lot.

Part of our summer fun does include buying tickets to the Lake Tahoe Shakespeare plays and it’s not too late for you to see a play too!  We really enjoyed Beehive and we think you will too!

Now is the time to get your tickets and see one of the performances at the Lake Tahoe Shakespeare Festival this summer!

Looking for more fun things to do in the North Lake Tahoe – Truckee area?  All summer long we have a number of free weekly events to enjoy (weather permitting), so check them all out: